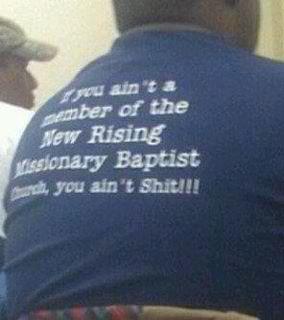 The 'My Church is the ONLY church going to heaven' syndrome

I have my radar permanently on for strange churches. I don’t know if you’ve had the privilege of attending one- it is a privilege because if you come out alive and in your right mind, you can survive just about anything in life.  I’ve been blessed in that manner but I neither hope for nor desire such a blessing again.

I have been in a church where the culture of the nationals superseded the word of God. I have also been in one where the church decided what day of the week you could get married on. When we were looking for a new church some years ago I would type in the name of the church and then the word ‘cult’ right after it. Because there is no smoke without fire, nuff said!

It would appear I have an affinity for such members because as I type this we are currently being stalked by yet another one. I won’t go into details but instead will share with you my freshly brewed experience. A little while ago we met this lovely couple at #2’s football practice. They were a lovely pair, seemed harmless enough and their twin boys both played in our son’s team. We gisted on the field quite often. No wahala. Then one day they told us they had something important to discuss with us, and could they come round to see us? We asked if it could be discussed over the phone, they insisted in person. We offered our time over the weekend, they insisted it couldn’t wait and suggested we meet for coffee that week after work. So we obliged them. The first 2 hours were spent gisting about nothing in particular –you know, the fact that the twins were so identical and how she was once told she’ll never have children, yada, yada, yada. This is called the warm-up.

Finally at a little after 10pm they began ‘the spill’. I knew we had arrived at that point because the woman took on a humble stance as she adjusted herself in her chair, while her husband shifted his coffee aside and put on a grave and sombre countenance. He shared about their dreams and how they were on course to achieving it, but God had stepped in to interrupt it. God wouldn’t let them move forward until they did his will. We agreed that seeking God’s will was very important in all our endeavours. He continued and spent a great  deal of time on how pressing this particular plan of God was, me I held on to the hope that our friend will eventually reveal the great mystery. And he did. The will was that they plant a church in our neighbourhood. By this time my radar had picked up the conclusion of the story aka the koko of the matter.  So on they went, they had prayed about it and God gave them a list of the founding members, we were of course on that list. The founding members were needed so that once the church was established; they themselves could then leave to pursue their dreams, seeing that the church was now in the hands of God’s chosen ones, aka those who had no goals or visions for themselves. At this point I wanted to belt out ‘do you not think I have my own dreams?’ But I didn’t, choosing instead to nod my head repeatedly like an agama lizard. Hubby said “we’ll pray about it and let you know”, even as he said it we both knew there shan’t be any praying about it whatsoever. I guess you could say we lied, Lord forgive us. They even offered and said “ we don’t want you to jump on the bandwagon just yet, pray about it for ‘confirmation’ and let us know”.

On our way home hubby and I ‘discussed’ in detail. The issue wasn’t the fact that they dragged us into the cold night at an ungodly hour, there were several baffling issues on so many levels. While we were together I had responded to each sentence (using my inside voice) and I’ll share some of my raised points:

1) You hardly know us. Just because I say amen in all the right places and I’ve quoted some scriptures does not mean I’m not a cult member.

2) Don’t you think God would have told us too? Reminds me of the story of the brother that went to the sister- ‘God told me you are my wife’ and she replied ‘did God also tell you that I’m a happily married woman?’ Some people take this ‘Fools for Christ’ thing to another level.

3) I have my own church and I have responsibilities there. How can you expect me to dump my beloved church family to enable you pursue YOUR dreams? You don’t even know the name of my church, like I said I could be a very ‘dodgy’ character.

So two weeks later we made our return trip to tell them what we felt. We rehearsed what our ‘official’ reasons were and agreed hubby would do the talking while I took the humble and sombre stance. You wonder why a rehearsal was needed? My friend, I’ve been there done that. Some people don’t take ‘no’ for an answer, plus they may not know where we live but do know that we’re at soccer practice on Saturdays, there’s no telling how far people will go- I don’t want wahala.. Hubby was very polite and explained our reasons for not dumping our church and following them like sheep. He said we’ll support them through prayers and even assist on outreaches when we can. Surprisingly they were very accepting and thanked us for being honest.

We thought that was it, but it was only the beginning of real wahala.

This post is dedicated to Lateefah Olayinka who reminded me to pick up my pen again! Thanks Lateefah!