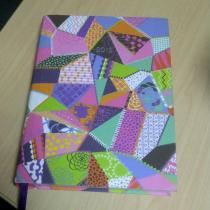 I am so glad we made it into 2012, “We” as in you and I. I have always liked the start of something new, moving into a new home, having a new baby, starting a new year and even writing in a new journal. The whole journal thing deserves a post by itself, I love paper. I love books and journals. I don’t just buy a notebook to write in, the cover has to have its own personality. The ones I purchase tend to depend on where I am in my life at that point, it’s almost a ritual. I arrive at the book or gift store in style- with no child in tow. This is a ME!! moment, like going to the spa. One season I picked an Indian baroque style journal complete with glitter and beads sewn in. Then there was a time I got one that was fabric covered in green linen- not just any green, a cross between olive and celery green. I love green, it’s a calming, peaceful colour. Next Journal was a rare 300 page one in a colourful, psychedelic design- you know that 60’s style design used to depict a drug-induced mind. That’s the one I’m still on- and I’m coming to the end. I haven’t started seriously shopping for a new journal yet because I just picked up a really cool day-to-a-page A5 diary. It is covered in a patchwork design that looks like a myriad of odd pieces of fabric haphazardly sewn together and I LOVE it! I chose that because I’ve recently been focusing more on interior design on the design blog. Read my posts here and here and let me know your thoughts if you don’t mind.

Last year (I’m ashamed to say) I was honored to have been tagged and awarded a versatile blogger award by the oh-so-consistent-in-her-blogging blogger, Nita. Nita, you are a stylish and sincere writer and I’m glad our paths crossed! Thanks so much for the award! As you have already guessed I gushed and ah-ed about the award but didn’t write the 7 random things about myself, so here it is:

1) I converse with myself- a lot. Sometimes I do it when I’m alone, at other times I do it when others are around. I used to work with a young lady who would have spontaneous bursts of laughter and say “Toks you’re so funny!” in her sing-song voice. When I asked why, she’d say “you’re talking to yourself, again”. I would start to explain I’m not talking to myself, I’m talking my way through a task, but instead say “never mind dear” with my “this-is-too-heavy-for-you-to-understand voice.

2) I don’t like arguments or confrontations. Therefore you won’t catch me starting a conversation with; “I need to have a word, you offended me the other day”. If the offence is so bad that I can’t overlook it, I tend to drift slowly away from the offender.

3) My favourite childhood movie is Chitty Chitty Bang Bang, with Sound of Music coming in at a close second. My favourite grown-up movie (I nearly wrote adult!) is Gone with the Wind. I cry when I watch it.

4) I had a happy, flawless childhood, I have no regrets at all about growing up in my household and I owe that to God and Mum and Dad!

5) I hate fish. Okay ‘hate’ is a strong word, but I don’t like the smell, the skin or the bones. My mum had to have surgery to her throat when I was a child to remove a fish bone, maybe that’s where the aversion stems from. I don’t know how people systematically place a pice of flesh embedded with bones in their mouth and somehow manage to swallow just the flesh and spit out the bones in a neat, confident fashion. I don’t care to know either. The skin, I have found to be of an irritatingly sleek and slimy texture, plus the markings resemble that of a snake. As for the smell, I believe there is a part of the fish where all the smell emanates from, it’s that brown part next to the skin. Since I can’t be bothered to extract brown flesh, I just forget the whole thing.

6)  I love to take solo short breaks, no hubby, no child, just me. A the risk of sounding like a Buddhist or new-ageist, getting away helps me get in touch with myself, *insert peaceful, zen-like voice* I would love to go on an all-girls short break soon though, like the ones you find profiled in Essence magazine like The New Orleans Essence Festival or something like that- and short means no less than one week. I do the solo breaks to catch up on work, reading and just to enjoy my own company because I think I make good company 🙂

7) I was supposed to be a doctor- but I got, er sidetracked, we’ll blame hubby for this one. I have a super-retentive memory when it comes to anything to do with the human body or medication, but I’m apt to forget my friends birthdays 😦

She said seven random things!  So I can’t tell you my most embarrassing moment-ever! (I would have gone on to tell you how I once walked in on my stark naked, middle-aged distant-relative. I was a teen and trying to act so grown up that seeing a grown man in his bathing suit was normal. It was his birthday and I wanted to be nice and give him a card, after all he and his wife had kindly welcomed me to their home when I arrived in Stratford. So when I knocked and I thought he said come-in, I behaved as though seeing him naked was no big deal. I still walked up to him to give him his birthday card while mumbling an incoherent ‘sorry, I thought you said come in’.  A normal child would have flinched and ran back. ) Argh!!!!

But if I told you I’dmlp+be breaking the award rules.

Thanks for reading and happy new year!!!

What I’ve Learned For Sure

I am so excited! 2010 is drawing to a close and I am here to witness it. I started to write this post about 2 weeks ago when fear gripped me, what if you don’t make it? Kia kia I put down the laptop and said “Abeg, I no do, let the year end then I’ll write”. Thankfully the Lord reminded me that premature death is not his plan for His creation, and that my future is in His hands. So here I am!

The start of a new year has got to be my favorite time of the year. I look back on the past year and reflect on it. This year, however is very different. I am genuinely pleased that we are in the last week of 2010. This time last year I couldn’t wait to get into the new year. My attitude was more of hope, hope that the new year held better things than the previous. I was eager to say goodbye to the year as it had been a challenging one.

It is not the same today. I am excited because I still have a few days to finish up unfinished projects. I want to finish strong and start next year right. I usually write out resolutions and goals. My goals are the same, but my resolutions have altered. This time I actually have a working strategy.

What I have learned for sure:

That the challenges that  I encountered were not meant to trip me up, but to make me stronger. Instead of being afraid when trials come, I have learned to embrace them and look for the lessons in them. Sometimes the lessons are obvious like the consequence of not being careful or exercising poor judgment as a result of not educating myself prior to making a decision. Other times the lessons are subtle, like the Lord teaching and training me to rely on him and put my confidence in him. I also learned to embrace and accept my weaknesses, mistakes and failures. My weaknesses are a part of who I am. I was created with those weaknesses so really I have nothing to be ashamed of. God is made strong n my weaknesses. I have friends who support me in particular areas. For example I wasn’t born organized but I have two amazing friends, Tola and Tiwana who are natural-born organizers. I remember once when Tola visited me at the store, she got to work and sorted absolutely everything out- dishevelled desk, files, and even invoicing without having any knowledge of the business. Tiwana and I stayed at the same hotel once and I of course was unpacked and unprepared for my early morning flight the next day. When I don’t get enough sleep I generally can’t get anything done, let alone sort out suitcases. She got in there and packed all our suitcases in no time and without breaking any sweat. It was like the fairy godmother of cleaning sprinkled some magic dust in my hotel room!

I have learned gratitude.  I used to wait for great things to happen before being thankful. Now I know that there are at least 206 bones to thank God for daily, 2 lungs, one heart, a brain, and then there are the body functions. I sleep and I awake- daily. I eat and enjoy my food. I can speak, I can hear, I have a functioning sense of taste, need I go on? Then there are relationships. My husband and sons, my parents, brothers, in-laws, cousins, friends, Facebook. Lets not forget work. I have an income. I work in an area I am gifted in so work always feels like play. I look forward to Monday mornings I don’t dread it.  There is also God. I actually have a relationship with the one who created me. Not only do I speak to Him, He actually loves my company. I once worked at McDonald’s and didn’t even know the regional manager. But I know the one who created him. I start and end my day now with 10 things I am grateful for and that keeps my eyes of the things that I want but don’t yet have.

I am glad that for the first time ever, I look back on the year without any regrets whatsoever. Yes there cringe-worthy moments I won’t forget ever like when I messed up an order with a VIP client, or when I wasted my time on unproductive activities, but I have no regrets because I can now guard against them and won’t be making many of those mistakes again.

Death. We lost a loved one this year. I learned that death is certain, sometimes it happens prematurely sometimes not. It is always so sad when a young person dies but in our case we take solace in the fact that he is in heaven.  He really is with the Lord and we are thankful that God made a way for mankind not to die an eternal death. I have learned that it is far better to live and die in Christ than to live for yourself- or anyone else for that matter.

I challenge you to make a list of the things you are thankful for that happened this year, the lessons you learned, the lessons you don’t want to re-learn and close the door on the past and move forward with joy and expectation into the new year!